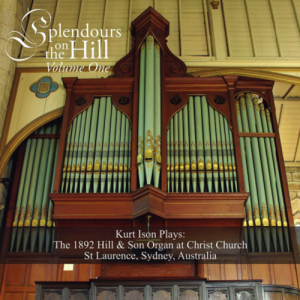 This exciting new disc gives fresh voice to one of Sydney’s best preserved historic organs, with a very wide variety of pieces that showcase the instrument’s dual personalities as both a Liturgical and concert organ.

Kurt Ison is the Convener of the Christ Church St Laurence Sydney’s successful monthly organ recital series that was launched in 2009. He is also one of Australia’s leading organists, having played solo concerts in prestigious venues such as St Paul’s Cathedral London, Notre Dame Cathedral Paris, Washington National Cathedral and Westminster Abbey.

This CD production was assisted by the OHTA through a grant from the “Christopher Dearnley Award”.

The CD may be obtained digitally as well as the traditional format (order using supplied form).