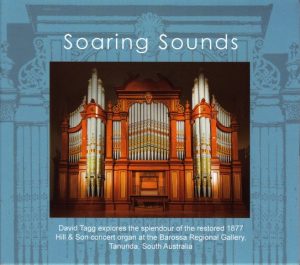 The choice of music in the first commercial recording of the 1877 Hill & Son concert organ at Tanunda has been influenced by works performed on the organ when it was placed in Adelaide Town Hall and played upon by distinguished local and overseas performers up to the visit of Marcel Dupré in July 1939. The organ was opened in October 1877 by Melbourne City Organist David Lee, a series was given in 1892 and 1896 by August Wiegand, Sydney City Organist, while in September 1903, Edward Lemare was a distinguished visitor, and played an amazing selection of repertoire. The instrument was well displayed during Marcel Dupré’s 1939 visit in a wide-ranging selection of works.

The performer David Tagg is one of Australia’s most gifted younger organists. His initial studies were at Knox Grammar School in Sydney with Peter Kneeshaw, and he has subsequently been organ scholar at St Stephen’s Uniting Church, Macquarie Street, Sydney and Christ Church St Laurence Anglican Church, Sydney. He has given recitals in the two Cathedrals in Sydney and Sydney Town Hall and accompanied the choir of Christ Church St Laurence in its overseas tour 2014-15, performing in London, St Albans, Brussels and Paris. He specializes in performing romantic music from England and France from the mid-19th century to the start of the second world war. He completed his postgraduate studies in architecture at the University of Technology Sydney in 2015 and now works within the architecture field.

The recording has been made by Thomas Grubb, of Mano Musica, Melbourne. The striking CD jacket includes an eight-page booklet.

The programme is as follows:

The CD may be obtained from the Friends of the Hill & Son Grand organ.