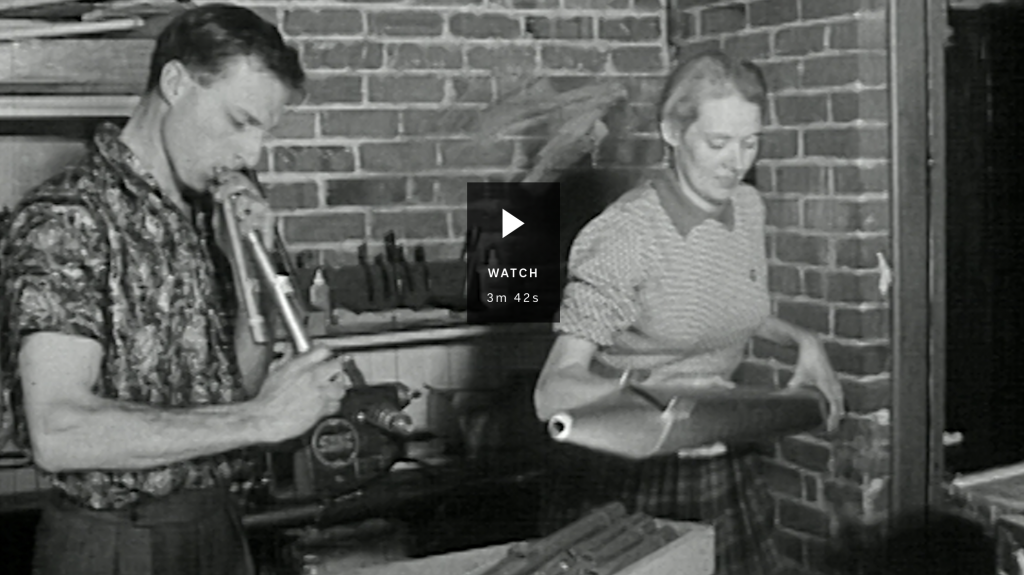 It is with sadness that we record the death, on 21 July 2021, of the noted Sydney organbuilder, Ronald Sharp, aged 91.  In recognition of his contribution to Australian organbuilding Ron was awarded the Queen Elizabeth Silver Jubilee Medal in 1977 and the British Empire Medal two years later. Ron had been a member of the Organ Music Society of Sydney since 1957 and was made an honorary life member in 2009.  Ron was also a piano tuner and technician, being a valued member of the Piano Tuners Guild of New South Wales and a contributor to the Guild’s workshops and seminars.

Ronald William Sharp was born in Kogarah on 8 August 1929, the son of William and Florence Sharp. Ron lived his entire life in the southern suburbs of Sydney: the family home was in Bexley and he later lived on the site of his workshop at 4 Hearne Street Mortdale, subsequently moving to Lugarno and Oatley.  His first marriage, in 1960, was to Shirley Watson and they had three children: Sandra, Wendy and Ronald. In 1977 he married Gillian Dean and they had two sons, Alexander and Hugo.  In 1999 he met Margaret Willis and they married in 2006.

His interest in music was developed through piano lessons given by his grandmother, participation in the flute ensemble at Bexley Public School and by friendships formed at Kogarah Intermediate High School. Ron learned the violin, cello, piano accordion and organ. After school, Ron was employed across a range of industries, commencing pre-apprentice study in the electrical and mechanical trades, later working in the areas of radio wiring, fruit canning and the maintenance and repair of IBM time clocks. During this time he read all the books he could find about organs and organbuilding in Sydney’s public libraries.

Although music, pianos and pipe organs became his life’s work and passion, Ron had many other interests and skills. He built a hi-fi for home use well before such units became commonplace – and on this he was able to play recordings of famous European organs that inspired him. He was a capable pilot and flew a ten-metre span sailplain he had made in the years 1954-56, while also owning and flying several powered aircraft.   He was also a keen photographer, designing and building photographic equipment, including a proto-type three gauge film projector. Ron also built a three-lens microscope and a six-inch mirrored telescope.

During the 1950s both Howard Pollard and Vincent Sheppard wroite extensively on the European Orgelbewegung in The Canon (a Sydney music periodical), hoping that such developments would find their way to Australia, as they did in 1958 when E.F. Walcker supplied a small tracker organ of six stops to St Andrew’s College, University of Sydney.  The arrival on the scene of a young Ronald Sharp was greeted with enthusiasm, even though he was untrained in the craft.  Ron’s vision and energy encouraged influential members of the Sydney organ community to support him and the exquisite tone of his small early organs caused a sensation.

Much has been written about Ron’s dislike of “loud” organs, his reference to organs as “machines” and organists as “machinists” and his relentless pursuit of perfection in tonal and mechanical matters.  Ron’s tonal designs were clearly of the Orgelbewegung, but without the harsh and shrill tone evident in some of the work of contemporary northern hemisphere builders.  In the years 1960-65, he produced nine organs: five of these were small single-manual organs and one was a diminutive two-manual practice organ for the Edgecliff residence of Norman Johnston, now in the ownership of our Melbourne member, Dr Andrew Mariotti. Ron was never shy to express his displeasure if he didn’t like the sound of a particular instrument.  Many well remember a superb recital given by Peter Guy during the 2005 OHTA conference visit to St Patrick’s Cathedral, Parramatta, where the 1898 Norman & Beard organ was in fine romantic voice. In spite of the acclaim accorded Peter and his excellent playing, many saw Ron sitting well away from the organ with fingers clearly stuck in his ears!

In 1964 Ron engaged two employees that would remain with him through to the completion of the Opera House organ.  These were Raymond Bridge (a highly skilled cabinet maker) and Mark Fisher (who, like Ron, possessed highly-developed design and engineering skills, combined with a fastidious approach to workmanship and a keen musical ear).  This small staff, working alongside Ron in the Mortdale workshop, first assisted Ron to build his two most significant early instruments – for Knox Grammar School (1965) and Wollongong Town Hall (1966).  These two instruments were widely acclaimed from the outset and led to Ron being awarded contracts interstate and, above all, for the Sydney Opera House. Ron also employed others to assist him as needed, such as electrical engineer, Myk Fairhurst, who worked on the electronics of the Opera House organ.

The 1966 instrument for Wollongong Town Hall was typical of Ron’s construction methods: steel internal frames, extensive use of plywood and the use of wire in the mechanical actions.  Mild principal tone was always evident, its sound sitting well on the ear in buildings with dull acoustics (such as at Killara Uniting Church and St John’s Canberra). His characteristic flutes and mutations were a constant in their exquisite voicing and regulation, as were most of his reeds.

Ron’s output was not large: only 17 instruments in total, with a handful of tiny medieval portatives augmenting the final sum. The controversy surrounding the completion and opening of the Opera House organ in 1979, combined with Ron’s reputation for slowness, caused many clients to turn to builders new on the scene, like Smenge and Letourneau. He was upset when he learned of alterations made to his organs, being greatly distressed when he discovered that the much-admired gem he had created in 1973 for Ormond College in Melbourne had been extensively rebuilt.  Although he continued to maintain many organs and always appreciated the interest people showed in his work, it was the realm of piano tuning and maintenance that was to be a mainstay for the remainder of his working life.  His instruments constitute a legacy quite unlike anything else in Australian organbuilding history: OHTA has a clear role in supporting the preservation of what survives of this unique heritage.

Ron’s funeral service was held on 28 July at Olsen’s Funeral Chapel in Sutherland. Owing to Covid-19 restrictions only 10 members of his family were able to attend, although others were invited to view the service via live streaming. We extend our sympathies to Ron’s wife, Margaret, his brother Bruce, his five children Wendy, Sandra, Ronald, Alexander and Hugo, their partners and his six grandchildren and four great-grandchildren. In preparing this article, I express gratitude for information supplied by Ron’s daughter, Sandra Fogarty and by our member, Peter Meyer.

My connection with Ron Sharp began not through the man, but through his organs – most notably, his 1966 organ at Wollongong Town Hall, which was the first pipe organ I ever played. Growing up in Wollongong, I started taking my first organ lessons there in 2013, and in that same year performed in my first organ recital.

It was very fortunate, in hindsight, for my first organ to have been such a beautiful one. While I now have a greater appreciation for English-style organs and organs of many other traditions, my initial understanding of what an organ was began with those singing, frighteningly-clear sounds made on Sharp’s instruments. I became acquainted with carefully-voiced bold reeds, the whoosh of the fast tremulant, the almost percussive chiff of certain stops, and the joy of sounding out the subtleties between his ‘Prinzipalen’ and ‘Flöten’.

My teacher at the time, Robert Smith, did not insist that I play a certain style on Sharp’s organ, so I never thought of it as a Neo-Classical instrument. I always enjoyed sitting down at that organ in the morning and playing away – anything from Bach to MacDowell to improvised ragtime. I think this unassuming stance is how Sharp himself thought of his organs. For him, it was always about making beautiful music, and his preference for Classical music never hindered his love of other genres – after all, he even had a keen interest in Wurlitzer organs.

Having sat so many times at the Wollongong console and seen “SHARP 1966” printed above the manuals, I always wondered whether I might one day meet the man. Fortunately, I did have that opportunity. Last year in May, I managed to get in contact with him online. Realising how old he was now, and with the Covid-19 restrictions now hindering movement, I realised that this may be my only chance to speak with him. I asked whether I could record an interview, and I am very pleased that he accepted. This interview is now on my Youtube channel “Pep Organ”, and I am grateful that many of you watched it and found it interesting.

Sharp will be missed, but his instruments will go on inspiring future generations. Like all great works of art, it takes many years before we start to truly appreciate what we have. For now, it is our role to be custodians of his organs, preserving them and presenting them in their best possible condition.