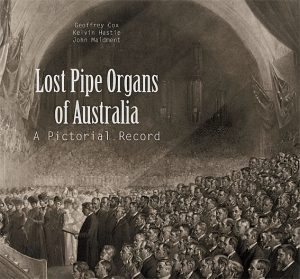 This book has been published to commemorate the fortieth anniversary of the foundation of the Organ Historical Trust of Australia in 1977. It provides a pictorial record of pipe organs in Australia that have been lost through various agencies. Some have simply been removed and broken up, others have been destroyed by fire, and others have been rebuilt beyond visual or tonal recognition.

Australia’s heritage of pipe organs stretches from the early nineteenth century to the present day, reflecting the cultural context in which the organ has existed. The cover illustration shows Tom Roberts’ well known painting of the opening of the first Parliament of the Commonwealth of Australia in 1901. In the background can be discerned the pipe organ built by George Fincham for the 1880 Melbourne International Exhibition, effectively ‘presiding’ over the event like a spectre.