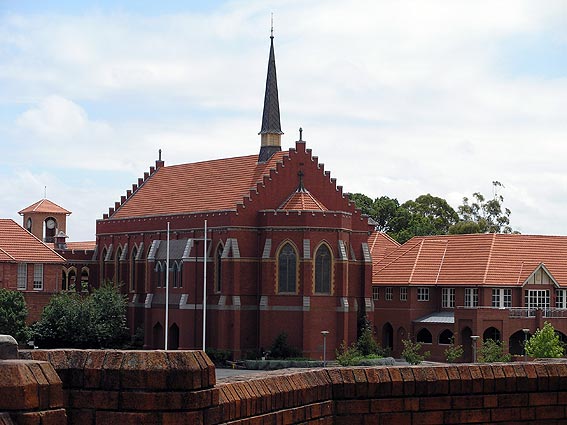 Work was completed in January 2004 on the resiting and restoration of this fine 50 stop Hill, Norman & Beard organ of 1930, in conjunction with the South Island Organ Company of Timaru, New Zealand. Input by the Jewkes firm included design, the enormous pedal 32's tonal finishing, restoration, conversion and incorporation of the 1961 Hill, Norman & Beard console from St John's, Toorak.

The organ's original console was of decidedly inferior quality to the rest of the instrument, not least in that one of its 3 manual keyboards did not match the other two. Low-slung, with stop-keys arranged in Christie theatre organ fashion, it was built into the dais of the organ's former home at Scot's Church, Sydney, thus lacking complete sides or rear panelling. It was therefore considered unworthy of retention by the school and in the meantime, the church had requested that the external shell remain in the building. 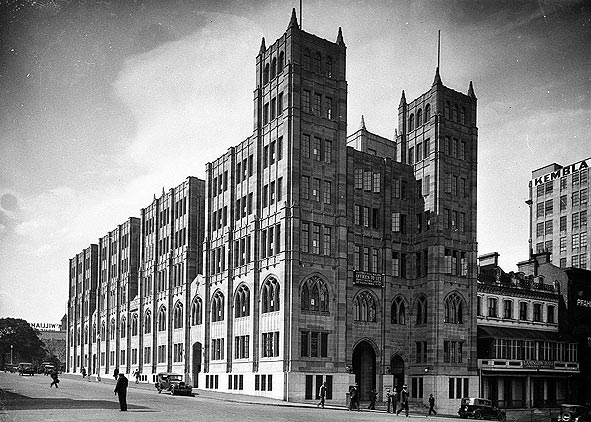 At the same time the former console from Toorak had been stored at the Jewkes Works since 1995, when the Toorak organ's original en fenêtre console was reproduced. Though surplus to requirements at the time, it was of high quality, with excellent fittings including generously thick ivory key coverings. It was therefore ideal in size, style and even manufacturer for the Scotch organ.

The original plastic stop knobs were replaced by ivory ones from the 1952 console at St Andrew's Cathedral, Sydney (Hill, Norman & Beard design). These were generously donated by Warren Southward who had retrieved them some years earlier just before this console was split up in preparation for another new en fenêtre one. They were sent to a specialist firm in the UK for cleaning and re-engraving in an appropriate font. The original builders' name plate was salvaged from Sydney and affixed to the "new" console - completing the Hill, Norman & Beard reunion!

A new case, to complement the fine 1920s Memorial Hall, was designed by the school architects Gary Martin & Associates. The 16' façade pipes were made by Australian Pipe Organs and gilded on site by Marc Nobel.

Peter Jewkes travelled to Melbourne in November 2003 to undertake the tonal finishing with John Gray of the South Island firm. The organ was opened in the course of a week's festivities, culminating with a splendid recital by Clive Driskell-Smith from the UK on 29 March, 2004. 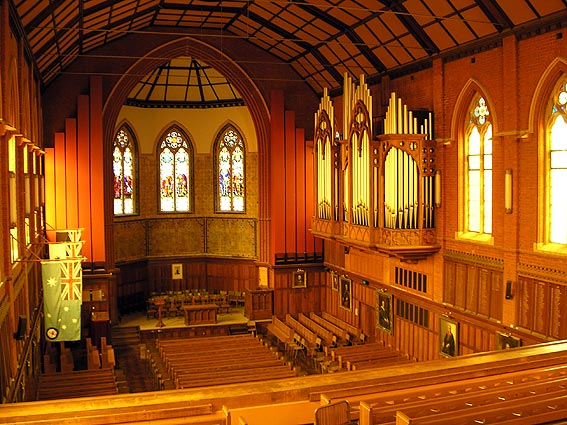 The past decade has witnessed a number of restorations of significant pipe organs in Melbourne and regional areas. Additionally, with the closure of churches, there have been several very successful projects where organs have been recycled into new homes - sometimes into environments where they sound and look a great deal better.

In March of this year, the most important organ restoration project in Melbourne for at least a decade came to a successful conclusion. Scotch College in Hawthorn was fortunate to acquire a very important example of the work of the organ building firm of Hill, Norman & Beard built in 1930 for the Presbyterian Assembly Hall, Scots Church, in Margaret Street, Sydney.

The Sydney building was about to be redeveloped, so the school was able to acquire the organ for its Memorial Hall, a lofty and impressive Gothic building in red brick designed by Henry Kemp. The previous instrument in the hall, also by Hill, Norman & Beard, had been installed in 1955 but was tonally inadequate for the large interior space at Scotch. It was sold to St Joseph's Catholic Church in West Brunswick. 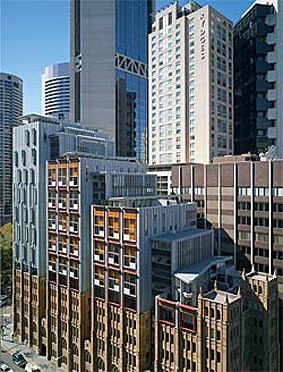 The 1930 organ was built on a grand scale with lavish use of materials. It included a rare rank of 32 ft open flue pipes, massive slider windchests, an elaborate wind system and a wonderful palette of sounds. The instrument was extracted from the building by the Sydney organ building firm of Peter D.G. Jewkes and placed in storage until restoration could begin.

Owing to the size of the project, the contract was let conjointly to the Jewkes firm and to the South Island Organ Company of New Zealand, who transported the majority of the pipework and mechanical components to its premises in Timaru. Here a very thorough and painstaking restoration of all the mechanical components and the pipework took place. Some necessary modifications were undertaken to suit the configuration of the new site.

In Sydney, the 32 ft pipes were restored by Peter Jewkes and a recycled Hill, Norman & Beard console of 1961 overhauled for the new location. It was possible to recycle 50 turned ivory drawstops from the former organ in St Andrew's Cathedral, Sydney (ivory is now unprocurable for such purposes).

Installation of the organ took place during school vacation periods throughout 2003. Given the size and weight of the components, scaffolding, hoists and even a crane have been employed. Towards the end of 2003, the pipework was installed, adjusted and tuned.

The results are magnificent in every way. The organ speaks into an ideal acoustical space with almost four seconds reverberation time when the full organ is played in an empty hall. The overall quality of the sound is of the highest order, with a colossal dynamic range and amazing variety of colour. The reed stops, made in London at Hill, Norman & Beard's York Road factory and voiced by Arthur Rundle, are of enormous distinction.

As the organ was placed behind Gothic grillwork in Sydney, a new organ case for the hall was designed by Garry Martin Associates of Hawthorn and made by DNG Restorations in Abbotsford from Australian hardwood. The design picks up motifs from the hall, such as the quatrefoils that appear in the window tracery.

New zinc façade pipes have also been made by Australian Pipe Organs in Keysborough to suit the design. The organ was opened at a celebrity concert at the end of March.

Scotch College is to be strongly commended for preserving this very important organ, one of the largest examples of its builders' work to remain intact tonally. 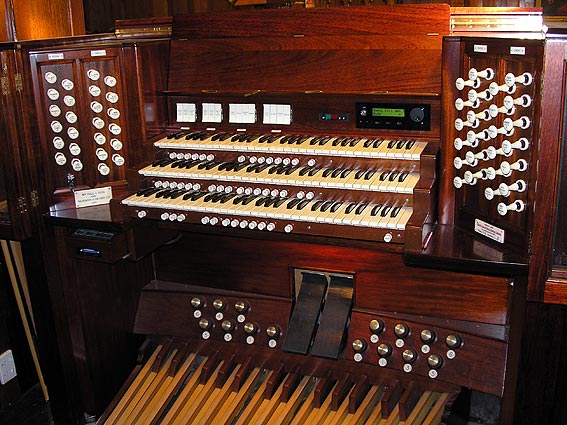 The current specification is:

Hill, Norman & Beard added the second Great Open Diapason in 1931. The acoustic of the Asembly Hall, Sydney, which could seat over 1,000, was very dry and the pipework was located in two concrete chambers behind a metal grille each side of the central stage with the console located in a pit below the pulpit in the centre. 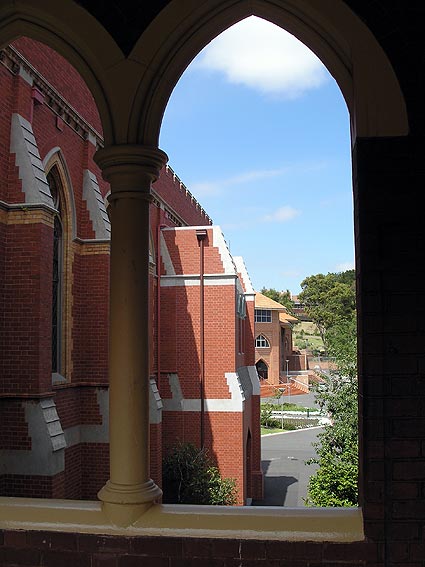 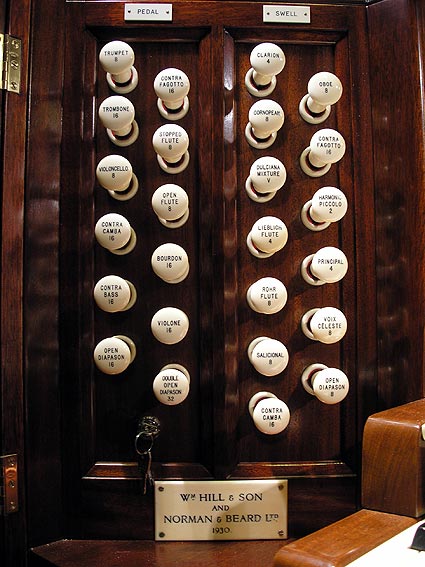 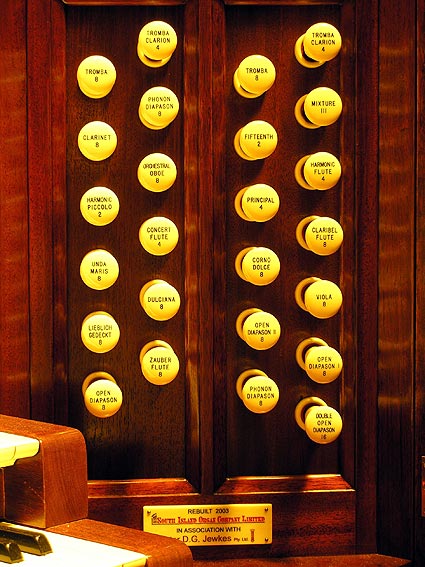 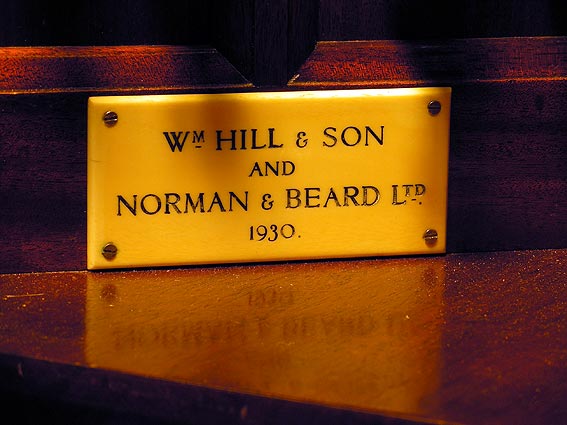 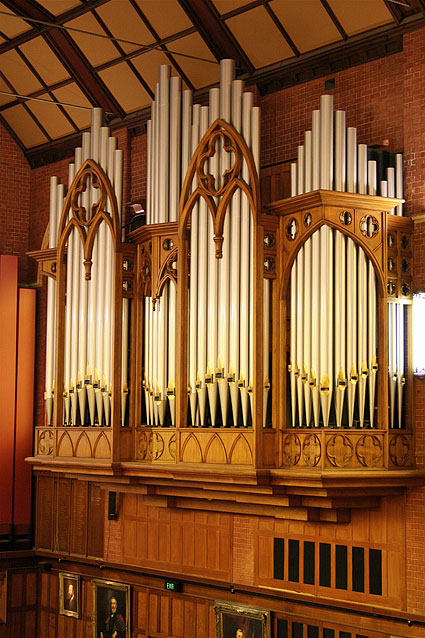 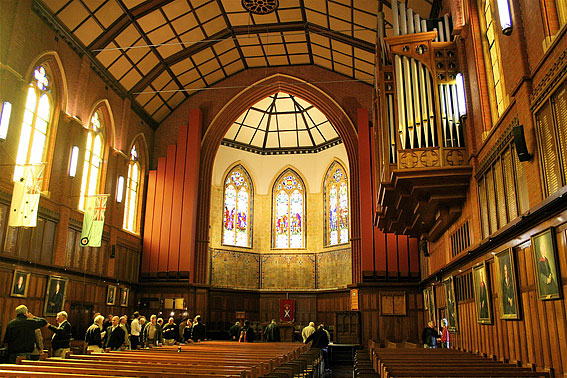 Speakers added to the 32' pipes
Photograph above: Trevor Bunning (September 2017) 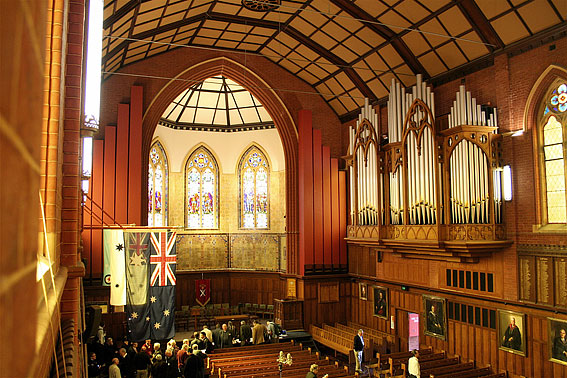 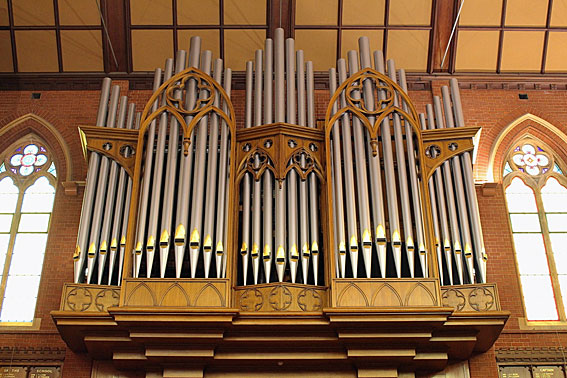 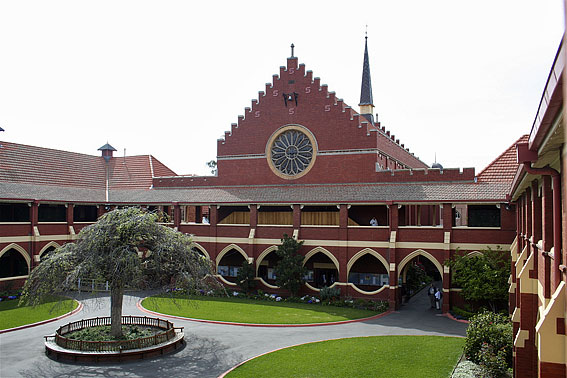 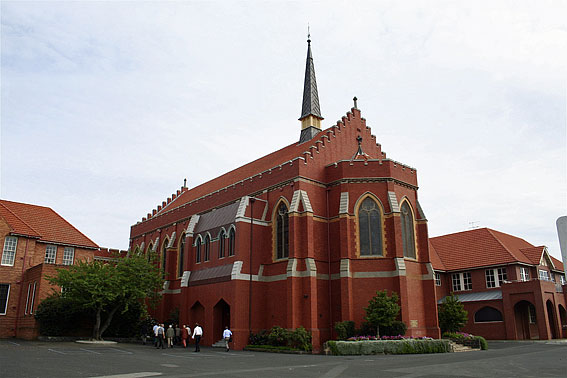