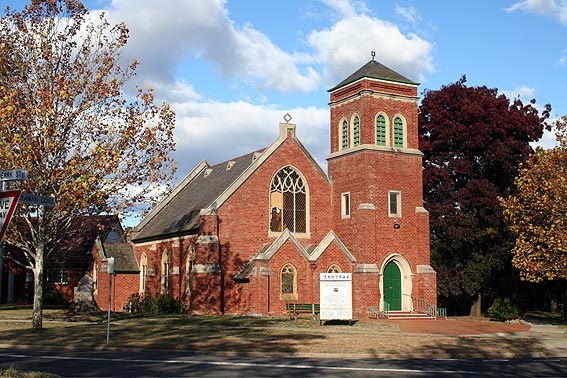 From: An Overview of the Pipe Organs of Canberra. Compiled by Geoffrey Wells with the help of many of the incumbent organists, priests and ministers, Trevor Bunning and many others. The Church booklets have also provided much background information."Printed by Christ Church (Anglican) Parish, Queanbeyan.


The Queanbeyan Circuit which embraced Canberra were concerned that provision should be made for Methodist services at Canberra (Acton), Duntroon and Cotter Weir (these being the greatest activity centres in 1914). Consolidation took place under the leadership of Rev.R.J.F. Boyer (later to lead the ABC). In 1926 the Rev. E.L. Vercoe was appointed to the Queanbeyan/Canberra Circuit, to 'look after the Canberra end of things'.

At that time Ainslie was the biggest suburb in the growing city, and the area here was known as South Ainslie. Two sites were offered for the Methodist Church and the current site selected, though with some contoversy, some persons wanting a site higher up Ainslie Avenue.

The Federal Capital Commission allocated "cathedral sites" and the Methodist Central site at Telopea Park (now Forrest) was allocated in 1929, but the selection went back to 1924, and dedicated in 1925. General Conference decided that this site should proceed in sections as necessity demanded and finances would allow.

It was felt that suburban churches would best fill the need of the growing city, so plans were accepted for the church at Ainslie. The Architect, J.C.R. Mills designed a number of Methodist churches, mostly featuring a massive Norman tower "which although dominant, was not out of place amongst the pointed gothic arches that he also used".

The church, in red brick, was opened on 8/9 October, 1927, and four extensions have been added since, all in sympathetic style. It was the first church to be built in the city of Canberra, although a Presbyterian Hall (erected at Braddon) was opened in February, 1927. (There were two pioneer churches from the previous century - St. John the Baptist, Anglican, Reid and St. Ninian's Presbyterian, Lyneham).

The church had a good quality American Harmonium until it was replaced by the current Walker pipe organ, dedicated on first Sunday in May, 1963. The organ is installed high up on a platform at the back of the church, with the detached console on the right of the Sanctuary. A trumpet stop was installed at the Golden Jubilee of the Church by Peter Jewkes.

Organists of the time included Harold Allen, Marjorie Bissaker and Stan Herring (the latter had played a significant part in the procurement of the pipe organ).

The organ contains 5 ranks with 24 stops and couplers utilising 379 pipes. 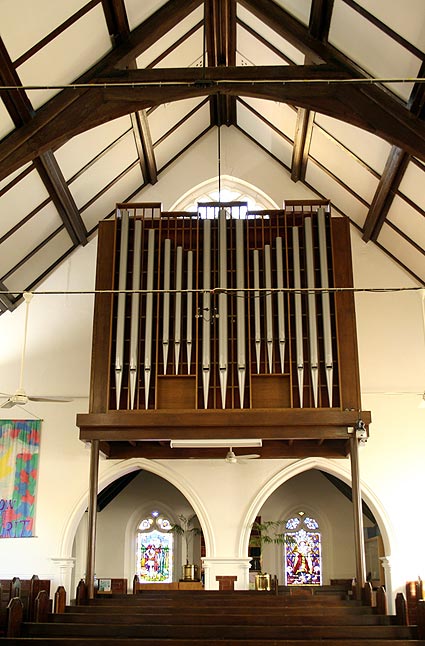 Peter Jewkes adds (7/2/13): 'The organ is entirely enclosed, from 16' bottom C to 2' top note. Often the larger Walker "Positives" had the Open/Principal rank outside the box, both for additional volume and to be able to provide case pipes (which at Reid are all dummies). The almost identical Walker at Griffith Cathedral has the Open/Principal externally. In the building at Reid this arrangement works quite well actually, and of course helps keep the organ in tune during Canberra's extreme conditions.'

In the 38 years for which this organ has been in the Jewkes firm's care, the actual church building has changed name twice. The Walker unit organ was purchased in its days as Reid Methodist Church, and has given excellent service for the half century since that time. Though a unit organ with a mere 5 ranks, the 24 extended stops are carefully voiced to achieve an unusually musical result, and the English Oak console - with generously thick ivory keys and ebony pedal sharps - is something of a "Rolls Royce". Sadly the Korean congregation now using the building no longer have use for the organ, and it was rescued by the Jewkes firm who brought it to Sydney for storage. A new home is now being sought for this fine product of its time, which because of its comparatively little wear and tear, can be very economically re-sited. 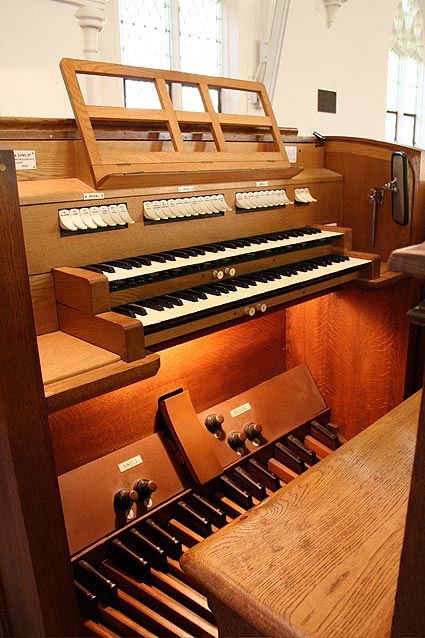 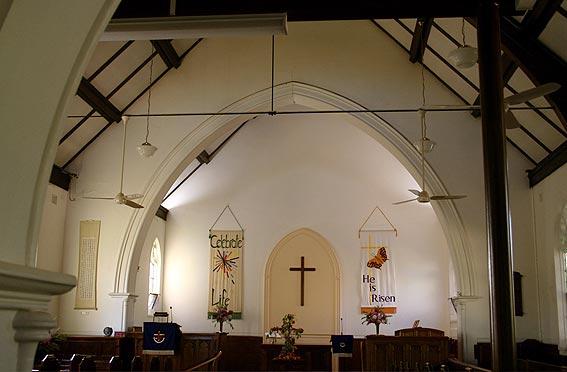