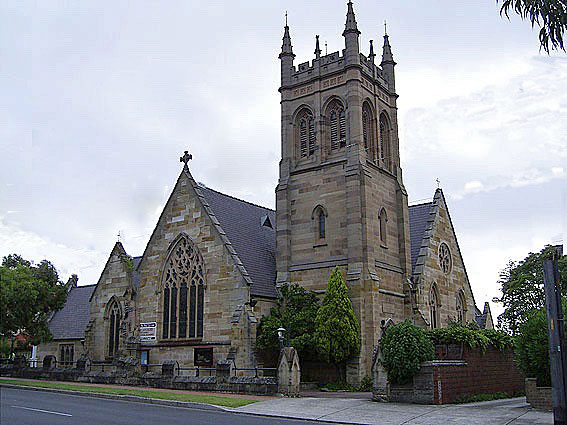 St Paul’s Burwood, located at the crest of a hill at the southern end of the Burwood town centre, is a landmark in the district and is a superb example of Sydney suburban Neo-Gothic in sandstone.  The foundation stone was laid in 1871 and the nave opened on April 1872.  The transepts and chancel were added in 1882 and the choir vestry in 1883.  While the tower base was built at this time, it was not completed until 1922. The building was designed by Edmund Blacket in the Decorated Gothic style and is of note for its varied window tracery, impressive array of stained glass and massive roof timbers: the chancel trusses reflect the influence of John Horbury Hunt on Blacket’s work of the period. [1]

In 1878 the church placed an order with William Davidson, of Sydney, for a two manual organ to cost £300 and to be provided with 15 speaking stops, with five of those prepared-for and installed in the years to 1887. [2]   Following the advice of eminent organist, Montague Younger, organist of St Andrew’s Cathedral, Sydney, the church resolved to enlarge the organ to three manuals, with the provision of additional ranks for all divisions.  As it was not practical to do this using all the existing material, Davidson re-used most of the pipework and possibly some other parts in what was otherwise a new organ.  A new case, with an unusual curvilinear flat of pipes in the chancel, was almost certainly the design of Arthur Blacket: this hid what was a substantial instrument in a space that was restricted in both size and acoustical egress.  Unused components, including the casework, were removed by Davidson to St Anne’s Anglican Church, Ryde, where the recycled organ was opened in July 1892. [3]

At Burwood, Davidson’s second organ was completed in 1891 as a memorial to an earlier organist of the church, Henry Wilkinson, who died in 1889.  The instrument was opened in a gala recital on 30 April of that year by Montague Younger, who expressed himself  “as being highly satisfied with the capabilities of the instrument, which, he says, is as nearly perfect as could be desired”. [4]

In 1905 Charles Richardson moved the case, console and Great soundboard forward by about a foot and a Clarion 4’ was added to the Swell.  A concave and radiating pedalboard was provided in 1915 and in 1930 S.T. Noad fitted an electric blower.  It would appear that the large double-rise bellows was replaced by two smaller single-rise units, possibly also at this time.

The Noad firm overhauled the organ in 1960, when tuning slides were added to open metal fluework, the choir division enclosed and balanced swell pedals provided at the console.  A tenor c Flauto Traverso 8’ was added on a spare slide on the Choir division at this time, or possibly earlier: of weak tonal output, it was removed in 2005 and replaced by a full-compass Flautina 2’, based in scale and design on the Swell Flautina at Bathurst Uniting Church, the organ there being a Davidson of 1874.

The instrument received very heavy use through the 20th century – not only for services, but also for a large number of funerals, weddings, civic services, teaching and concerts: the instrument was thus in use almost on a daily basis.  By the 1980s the instrument was so heavily worn that there were proposals to introduce electric action.  As a result of this, the organ was placed under the protection of a Permanent Conservation Order imposed by the Heritage Council of NSW in 1987, after hearings and inspections in April, May and June of that year, at which representatives of OHTA and other parties made a number of submissions in support of the conservation of the organ. [5]   Although other pipe organs in New South Wales have been covered by both interim and permanent conservation orders, the Burwood instrument was the first and only instrument whose protection was brought before a public hearing and whose importance to the environmental heritage of the state was clearly confirmed.

With the rebuilding of the larger Davidson organs at St Thomas’ North Sydney and St James’ King Street (and organs by George Fincham and J.E. Dodd), the Burwood instrument is now of national significance as the largest example of an Australian-built 19th century mechanical action organ surviving largely unaltered today. Although it fell into a period of disuse after 1987, the arrival of The Revd John Kohler and Luke Green (organist 1997-99), saw the instrument return to service, with plans subsequently developed for its restoration.

The restoration of the instrument by Peter D.G. Jewkes, has been undertaken in two stages (2000-01 and 2004-05) – the first involving the pedal division, the provision of a new concrete chamber floor, the restoration of the Trumpet stop and the reconstruction of a double-rise bellows – the second covering the entire remainder of the organ.

The cost of the work has been met by fund raising, the utilisation of part of a generous bequest, and two grants totalling $80,000, provided by the NSW Heritage Office.  The consultant has been Kelvin Hastie, who represented OHTA submissions to the 1987 hearing, mentioned above. The façade has been carefully repainted by Marc Nobel, of Melbourne, who has painstakingly recaptured the original patterns and colour schemes, damaged beyond repair by corrosion, fading and overall decay.  After some debate, the unoriginal choir enclosure was removed, thereby allowing better access for maintenance and better tonal egress for the Swell.  Because the original drawstop domes had been drilled to allow the fitting of brass screws (probably in 1960) and because they were heavily worn, a decision was made to provide a new set, copying the old English script of the originals. Cork stoppers in the Choir and Great metal stopped flute ranks were replaced by felted canisters to facilitate greater tuning stability and the long-term protection of the pipework.  The keys were also recovered in ivory resin. 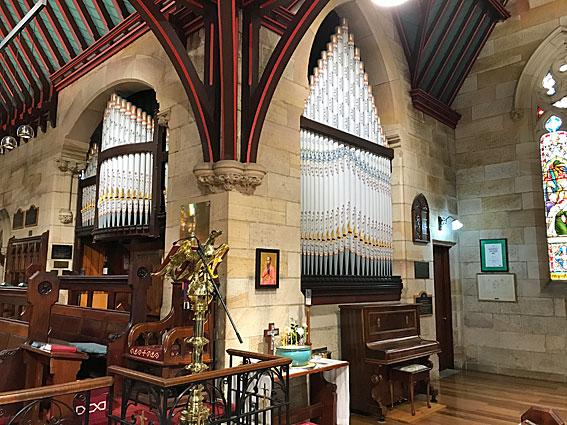 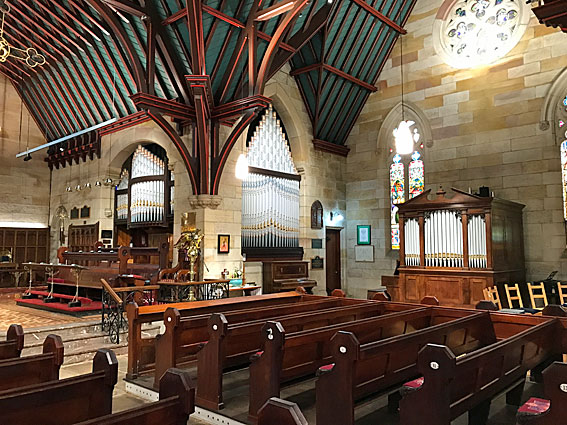 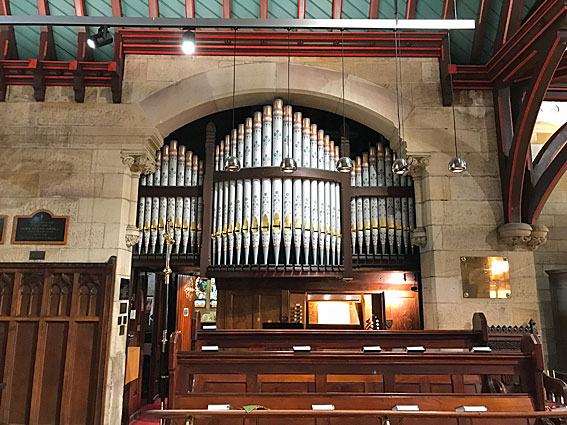 + Most original labels provided with two full stops under “ft”

* Stands on a clamp at rear of Great soundboard 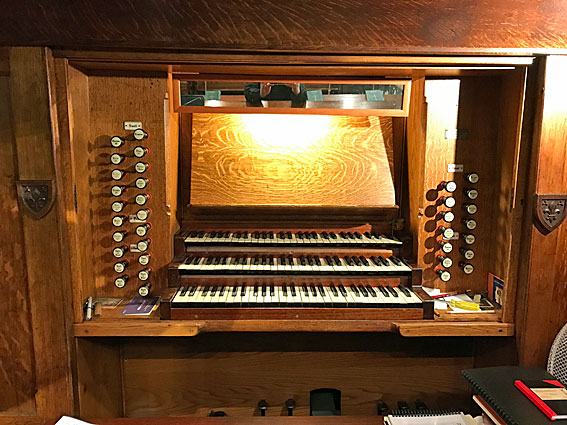 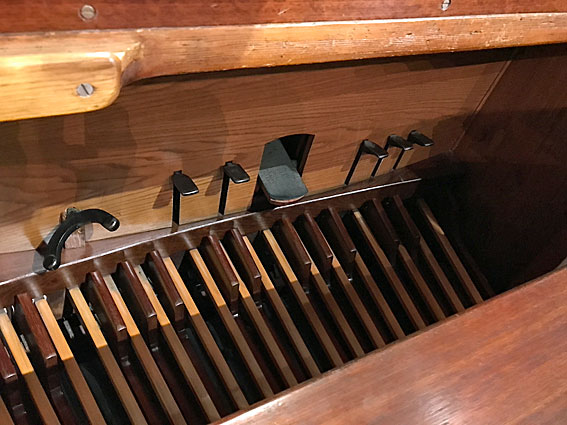 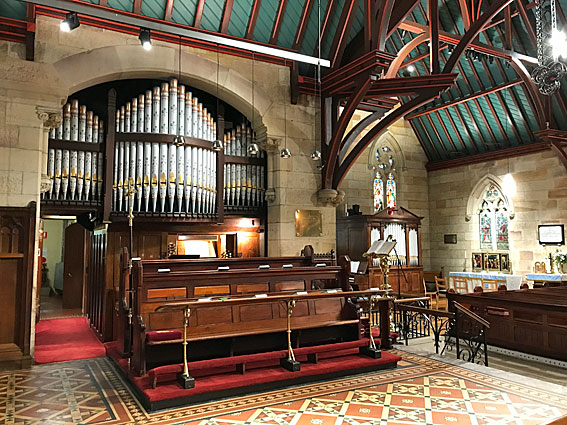 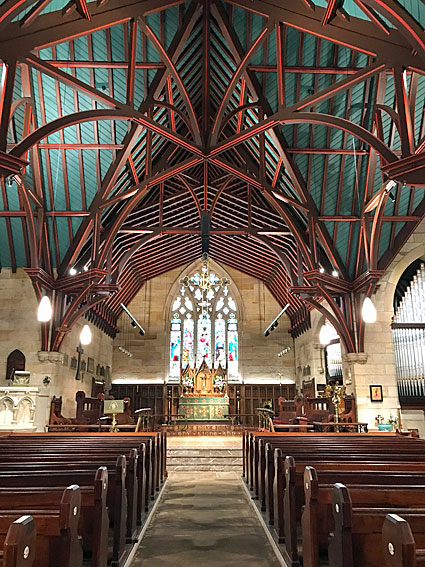 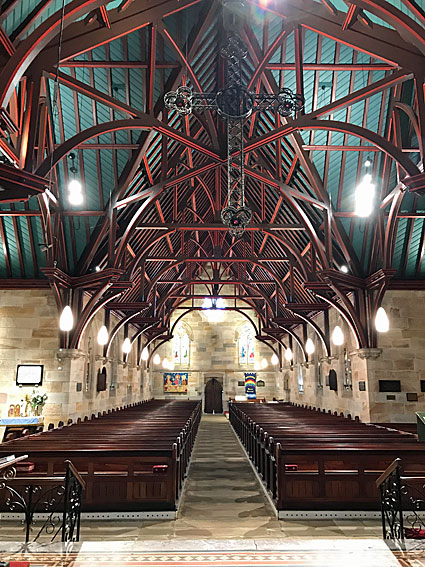